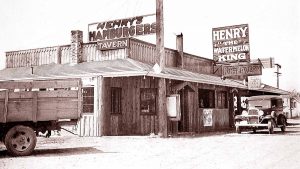 In 1931, Henry Lemm built a long narrow structure at 6215 Bothell Way and created Henry’s Hamburgers and Tavern at the east end, and a summertime fruit stand called Henry the Watermelon King at the west end. Watermelon lovers could purchase a melon slice for 5 cents and “sit on the bank overlooking Lake Washington to see who could spit the seeds the furthest,” according to a local resident.