July 26 marks the 32nd anniversary of the passing of the Americans with Disabilities Act, or ADA. The ADA mandates that qualified disabled individuals shall not be excluded from participation in, denied the benefit of, or be subjected to discrimination under any program or activity.

The ADA is the first comprehensive civil rights law that protects people with disabilities from discrimination on the basis of disability. It was passed almost unanimously by the U.S. Congress and signed into law by President George H.W. Bush on July 26, 1990. The ADA is a companion civil rights legislation with the Civil Rights Act of 1964 and the Rehabilitation Act of 1973. 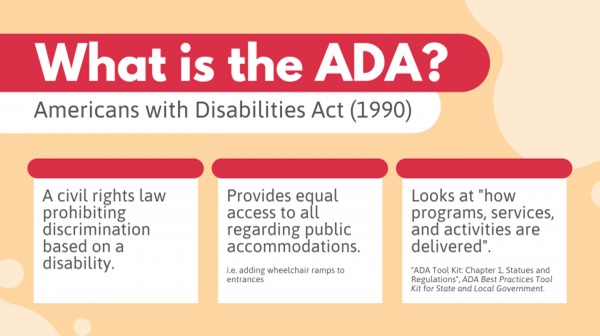 The ADA is divided into five parts, or Titles:

Under the ADA, the term “disability” for an individual means that they meet any one of these conditions:

The ADA protects people with disabilities from discrimination in all aspects of employment, in access to public services such as transportation and state and local government programs and services, and access the goods and services provided by businesses such as restaurants, stores, hotels and other types of businesses such as law offices and medical facilities. The ADA also requires design criteria be provided for built structures, transportation, communication, medical diagnostic equipment, and information technology.

It is important to establish these protections and accesses because the 2010 U.S. Census identified that 56.7 million people, or almost 20% of us, have one or more disabilities. This number continues to grow as our population experiences aging, accidents, difficulty in accessing healthcare, or disabilities incurred in combat by returning soldiers.

The City of Kenmore works to provide universal access to all areas covered by this significant legislation (Kenmore ADA). It has active policies and programs in place to both comply with ADA and to reach out to its population. For example, the City is currently gathering input via a survey from residents and users of Kenmore’s pedestrian facilities about any existing barriers to accessibility, and to suggest priorities for making improvements. You can also report a concern about City of Kenmore facilities at Kenmore-Report-A-Concern.