On the outside, St. Edward Seminary is a fantastic Romanesque Revival building, four stories of glowing, pastel brick on a sweep of green lawn above Lake Washington. 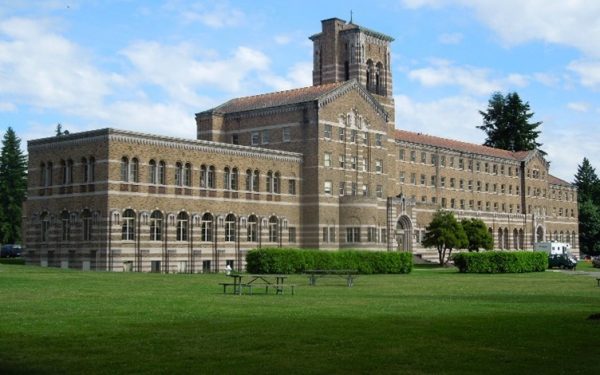 On the inside, time has been savage to this building.

Chips of paint the size of a hand peel from concrete walls. In places, internal pipes that drain gutters down to a subbasement cistern have leaked and turned concrete walls to rubble. It is empty, dirty, eerie. But in places it’s also elegant, formal, divine.

And in its magnificent desolation, it serves a most unusual role.

The 90,000-square-foot building, the centerpiece of St. Edward State Park in Kenmore, has been used as a set for a handful of horror movies and thrillers. Local police and firefighters use it to train bomb-sniffing and drug-sniffing dogs. Most of the building is closed to the public, but the dining hall is in good condition and is available for rent for corporate meetings, weddings and retreats. The outside of the building, which has an air of European elegance, creates a glorious setting for weddings all spring and summer long.

Earlier this year, St. Edward State Park was in jeopardy of temporary closure due to the state budget crisis, even as contractors finished a $2.4 million project to fix drainage problems that routinely flooded the lower floor with several inches of water.

But a new donation program approved by the state Legislature, which will collect money through the vehicle license-tab renewal program, is expected to raise enough money to keep St. Edward and 39 other state parks from closing. And its popular swimming pool, which briefly closed while the park service looked for a new operator, will reopen to the public June 6.

A few years ago, Portland brewpub company McMenamins proposed turning the seminary building — which is on the National Register of Historic Places — into a hotel and brew pub, but the idea was shot down by the community. One neighbor has suggested turning it into a repository for state archives.

“All kinds of ideas have been thrown out, but nobody really knows what we’re going to do,” said Mohammad Mostafavinassab, the park’s manager.

Just fixing the remaining water-intrusion problems and making the building capable of withstanding an earthquake would cost $58 million.

Because additional changes would cost millions more, and because that type of money no longer is floating around state coffers, it’s likely that the seminary building is going to remain pretty much what it is today: a magnificent edifice on the outside, a magnificent mess within.

Rich sense of a history

Bishops and priests. The Trapp Family Singers. TV and movie actors. A family of snowy owls. And dozens of Catholic Church dignitaries and state politicians — they’ve all passed through, or lived in, the building where Mostafavinassab and his wife now rear their three children.

He and two other park employees live in apartments carved out of the building, which educated young boys for the priesthood from 1931 until the late 1970s, when the Catholic Church sold the 316-acre property to the state for a park.

Living here is a peculiar perk: On rainy days, Mostafavinassab’s children can ride bicycles around the empty library on the second floor. And who wouldn’t want to tell their friends they live in a 90,000-square-foot mansion on Lake Washington, complete with a swimming pool?

But there are plenty of downsides, too. Among them: You can’t hang a picture. The reinforced concrete walls won’t take a nail, and tape sticks for only a few months before it peels off.

Mostafavinassab, who has lived at St. Edward for six years and enjoys taking guests on tours through the building, is a virtual encyclopedia of knowledge about the building’s history.

It was designed by noted Seattle architect John Graham Sr., who also designed numerous downtown Seattle landmarks, such as the Frederick & Nelson building. The seminary was built almost entirely of reinforced concrete; the brick is only a facade. After ground was broken in 1931, it took laborers a mere six months to build the outside and two months to finish the inside.

One day in the science lab, he turned over a piece of wood used as a pullout writing surface. It was covered in graffiti, the bored musings of long-ago seminary students.

That included Gov. Chris Gregoire’s husband, Mike, through the building. He was recounting a story he’d heard of how the boys sometimes hid forbidden magazines in their closet drawers. To demonstrate, he pulled out a drawer and flipped it over. To his horror, a dusty pinup magazine from the 1960s was lying in the hiding place.

As a movie set, the building makes a fantastic backdrop. A few scenes from the TV show “Northern Exposure” were filmed here, and St. Edward’s other credits include “Singles,” “Chocolate Wars,” “Alone” and “Butterfly Dreaming,” Mostafavinassab says. Fake blood is still splattered on some of the floors.

An oily substance oozes from walls in the priests’ apartments. Park staff members took samples for testing. The substance was nicotine. The priests, it turns out, were heavy smokers. 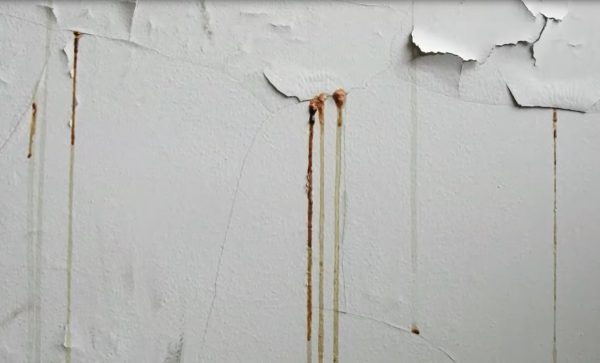 The parquet floors in those rooms are peeled and cracked, but the mahogany doors throughout still give off a rich glow. Two-inch-thick marble, believed to be from a quarry in Alaska, divides the bathroom stalls. The chalkboards are made of solid slate. But the building is largely devoid of decoration, perhaps befitting the monastic, somewhat austere lifestyle lived by the young priests-in-training.

“It was a very regimented life of prayer, study and recreation,” said Father Paul Magnano, vicar for the clergy for the Archdiocese of Seattle.

The food, cooked by French Canadian nuns who lived there, was “not good at all,” and the students had to observe what was called “grand silence” from 9 p.m. until early morning, the hours signaled by a bell system. “Your life, in a sense, was controlled by bells,” he said.

But Magnano has fond memories of his student days here, of the building and its lovely setting. He especially liked the hallway that led to the dining room; there, the boys lined up for prayer services, singing Gregorian chants in Latin under the archway while light streamed in through the wavy, leaded-glass windows.

Seminary students who come back to visit St. Edward often speak warmly of their years here. But not all the stories are good ones.

In 2005, the Rev. Lawrence Minder, former head of St. Brendan Church in Bothell, resigned from the priesthood after telling his parishioners he had been abused by a priest at about age 15, when he was a student at St. Edward.

On a few occasions, Mostafavinassab says, Catholic Church officials have asked for access to the rooms, drawn sketches and taken pictures, and then left without explanation. And when the buildings viewed through the prism of today’s news headlines about sexual abuse in the Catholic Church, one can feel a twinge of unease at the Spartan setting and the tiny rooms shared by the boys.

A rite of passage

But Mostafavinassab’s favorite story is a playful one: Former seminary students told him that some of the boys bought a Volkswagen bug — strictly forbidden, of course — and hid it in the woods. When they wanted to go into town for fun, the students picked up the lightweight car, carried it to the road and drove off. Each senior class bequeathed it to the next class upon graduation, sharing the secret hiding place.

Among the guests were the Trapp Family Singers — the ones who inspired “The Sound of Music” — who stayed here and sang for the boys in 1956.

In the early 1980s, after the Catholic Church had moved out, the Young Adult Conservation Corps — a federal program that put unemployed 16- to 23-year-odds to work — used the building. But after a 19-year-old boy fell out of a third-story window, state and federal investigators discovered the facility was being used for drinking parties, and marijuana and LSD use was rampant. The program closed when it ran out of money.

The seminary has been of particular interest to the Washington State Ghost Society, which claims the building is haunted by spirits.

“We’ve had three different ghost investigations here,” Mostafavinassab said. “I don’t believe in any of that stuff.