Let’s look at some recent law-enforcement history through the 37-year career of Deputy Gary Zornes of the King County Sheriff’s Office. Gary’s career began in October, 1980. After graduating from the police academy, he was assigned to the North Precinct in Kenmore, serving unincorporated areas of King County north of I-90 between Puget Sound and the crest of the Cascade Mountains. He patrolled the Kenmore area for most of his career.

If you attended Kenmore Junior High (now Kenmore Middle School) or Inglemoor High School over the past 22 years, you met Gary. As School Resource Officer, he helped keep the schools safe. Gary chaperoned your prom and homecoming dances. He was there for your sporting events. He also assisted with the “Live Drunk Driver Accident” drill each year before graduation to emphasize the dangers of driving under the influence of alcohol or drugs.

One of Gary’s most memorable arrests came early in his career. He was returning from a training session with two other deputies and a sergeant (me). Gary and the next most-junior deputy, Donn Potteiger, were riding in the locked-in back of the patrol car – seating usually reserved for prisoners (there are no interior door handles). Radio dispatched an alert for a stolen vehicle. Shortly thereafter what to our wondering eyes should appear but the stolen vehicle and two felonious occupants. Our driver, Deputy Mark Edmonds, gave chase. After a three-block pursuit, the stolen car crashed into a dirt bank. The suspects ran from the wrecked car. Edmonds and I jumped out, pursuing the suspects on foot, forgetting that Gary and Donn were left behind, locked in the back seat. Being a bit skinnier then, Gary squirmed through a narrow opening in the divider between front and rear seats. You now know how Gary’s slight frame earned him his nickname “Bones.” Gary freed Donn before joining the foot pursuit. Both suspects were apprehended – another successful day for law enforcement and another lesson learned, as Gary has reminded me on several occasions.

Police work changed a lot during Gary’s career, and he was often a leader in pioneering the new ways. He was among the first officers in the United States to use laptop computers in the patrol car beginning in the mid-1980s. Gary became a Technical Flight Officer for the Guardian One helicopter unit in 1994, assisting with navigation, communications, use of FLIR (a thermographic camera that senses infrared radiation), and searchlight operations. Gary volunteered to become a member of the initial School Resource Officer program in 1995, one of the first such programs in the nation.  Gary was also a Beta tester for the last three electronic records systems for the Sheriff’s Office. 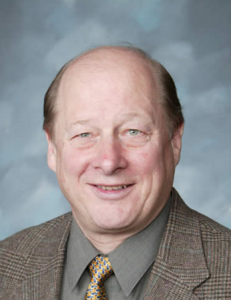 A Kenmore resident since 1979, David Maehren joined the King County Sheriff’s Office in 1972 and served in a variety of assignments before retiring with the rank of captain in 2002. He has been a Northshore Fire District commissioner since 2001 and is a long-time community activist. He co-chaired a citizens’ group that won voter approval for incorporation of Kenmore in 1988; chaired the city’s first Planning Commission; and served as president of the Arts of Kenmore from 2012 to 2016.

When the city of Kenmore incorporated in 1998, Gary, by then a Master Police Officer, became one of the city’s first officers under a police-services agreement between Kenmore and the King County Sheriff’s Office. He also helped field-test the first “mobile data units” in 2003, querying the police data systems directly from the patrol car.

Gary’s last shift was on Christmas 2017.  A grateful community wishes him and his family the best in a well-deserved retirement.

Next month we will take a look at a bit of the Fire Department history.

I welcome feedback and personal stories from readers. Feel free to contact me at davidcmaehren@kenmoreheritagesociety.com.

About this blog: Public Safety is essential for a community’s well-being.  Kenmore is fortunate to have excellent police, fire and emergency medical services. Our public-safety systems have evolved over time. In the early days there were no local police officers, no firefighters, and no emergency medical services. This blog will document the history of public safety in our area.  A few interesting stories will illuminate the way.