Imagine living in Seattle over a hundred years ago before World War I and planning an exciting Sunday excursion to Kenmore and environs by train.

Train travel for business and pleasure in the Seattle vicinity began in the 1880s. In 1885, the Seattle, Lake Shore & Eastern Railroad began laying track from downtown Seattle following a route around the west side of Lake Washington and through Kenmore along what today is the Burke-Gilman Trail. It reached Bothell on Thanksgiving Day of 1885. Pushing on through Woodinville and Redmond, by 1888 the railway reached Issaquah, becoming a major regional line serving Puget Sound logging areas. Later it continued east to Preston, Snoqualmie, and North Bend.

Since woodland trails connecting Seattle and Kenmore were primitive, Seattle dwellers would take Sunday afternoon train rides to Kenmore to see the wilderness. Soon they could even go as far as Snoqualmie, and Sunday excursion trains filled with sightseers ran from Seattle through Kenmore to Snoqualmie Falls.

Despite its relatively short length, this railroad system benefited residents of King County, and Kenmore in particular, even though the community remained a whistle-stop rather than a scheduled passenger stop. A rail siding led to the McMaster shingle mill on the Kenmore waterfront. The rail station, decked out in the usual depot color scheme of that era Indian red with bottle green trim stood across from the mill managerís house, between the railroad tracks and the siding that led to the mill (in the vicinity of the modern-day Kidd Valley restaurant on Bothell Way). Passenger service to Kenmore ceased in 1941, but trains continued to pass through Kenmore.

The SL&E line was acquired by the Northern Pacific Railroad in 1892 and was in service regularly until 1963. As late as 1965, the company was using steam-powered locomotives on the route between Woodinville and Ballard, with a crew consisting of an engineer, fireman, conductor, and three brakemen.

In the early 1960s citizens sought to have the Northern Pacific Railroad abandoned its route along the west side of Lake Washington in order to permit the creation of biking and walking trail on the old roadbed. The company was reluctant to sell its right-of-way, feeling it might need the route in the event of a railroad emergency. Then a railway wreck occurred on the eastern lakeshore, thus legitimizing the company’s concern. 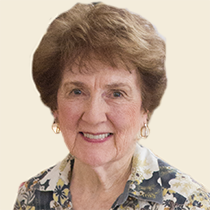 Jo Ann Evans – A Montanan by birth and a Washingtonian since 1954, Jo Ann Evans is a long-time activist in the Puget Sound Theater Organ Society and plays the 1924 Wurlitzer organ restored by her husband, Russ. She also serves on the boards of Arts of Kenmore and the Kenmore Heritage Society and received a McMaster Heritage Award in 2007 for community service.

Immediately following the wreck, the Northern Pacific routed a train through Kenmore in order to bypass the accident At about 2 AM the long line of freight cars came rumbling and clanking along the almost-defunct right-of-way, pulled by a huge diesel locomotive. Following regulations, the crew blew the throaty air horn at every crossing. The crew enjoyed the spectacle of house lights coming on all along the lakeshore route as people rushed outside in nightgowns and pajamas to see what was going on.

Photo caption: Train & Car on Bothell Way
It appears a train and car are racing eastward in this 1930 photo, with Lake Forest Park in the background. At the left above the tracks, it appears log booms are in the lake.